The Joint Association of the Grand Site of the Cirque de Navacelles was set up in 2007 and consists of a grouping of the Pay Viganais, Lodévois and Larzac municipalities together with the departmental councils of Gard and Herault. The Joint Association, which coordinates and manages the Grand Site de Navacelles, is the structure which makes the decisions about the work that needs to be undertaken and the employment and finance that is needed.  It is assisted in this work by the steering committee of the Grand Site initiative.

The program of the Navacelles Grand Site initiative is implemented on the ground by its members acting as project managers, divided as follows : 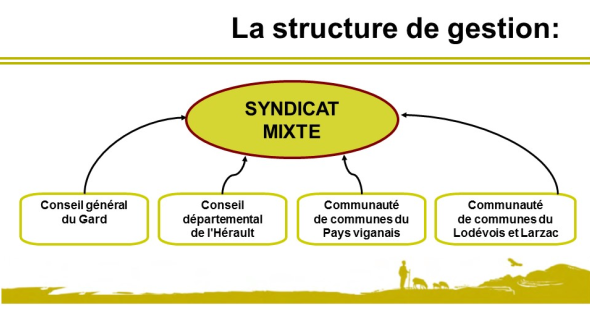 A close partnership with the Southern Causses environmental association (CPIE)

The CPIE (Centre Permanent d’Initiation à l’Environnement) of the Southern Causses is in charge of the setting up, drafting and implementation of agri-environmental measures (such as Natura 2000 OCAGER …). It also runs related public and school programs as well as the resource and publications centre. Formalized by a multi-year agreement, a close and constant interaction is present between the CPIE and the Joint Association, including reciprocal participation in all meetings of the technical committee, steering committees and of the association.
On the other hand, the municipalities who are also individual members of the CPIE of the Southern Causses are de facto members, and together with the departmental councils, finance the action programs of the the CPIE.

(1) The CPIE of  the southern Causses is a Centre Permanent d’Initiation à l’Environnement. With a focus on partnership, it is made up of one third elected officials, one third agricultural and forestry professionals (professional federations etc.) and one third environmental protection, environmental education and hunting associations; drawn equally from the Gard and Hérault departments. The association´s primary purpose is to  ensure the safeguarding, development, concerted and sustainable development and the promotion  of Gard and Herault limestone plateaus known as the “Southern Causses”, their Lodévois foothills and  the Vis and Virenque gorges. Its areas of expertise cover  agriculture, forestry, environment, environmental education, ecotourism and green tourism.

This is the monitoring and working body that enables the preparation of steering committees and association committees. It is the forum for debate and technical cooperation as well as exchange with state agencies and local partners (CCI, chambers of agriculture …). It is composed of representatives of the various member bodies of the association, the CPIE, the DREAL and the STAP of the two departments. In its expanded form, it is open to all local partners, state structures taking part in particular projects via the monitoring committee. 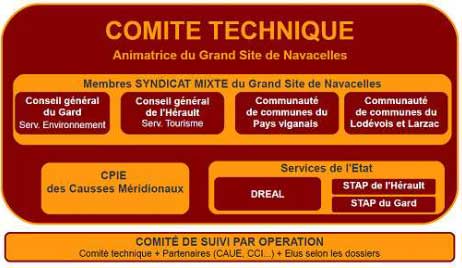 The Steering Committee of the Grand Site initiative 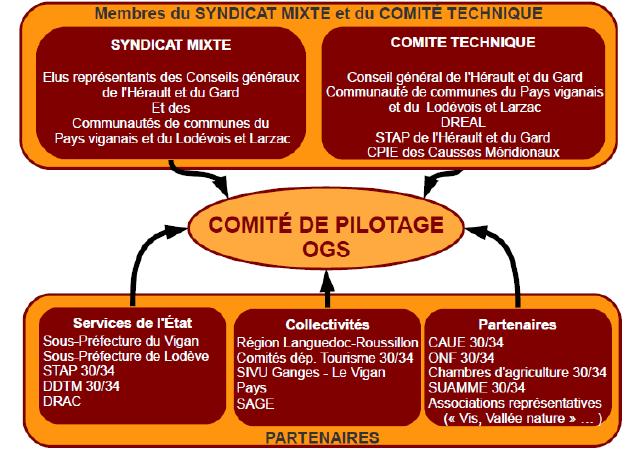