Karst landforms… from sea to rock.

Originally covered by the sea, the plateaus were formed from marine sediment accumulated 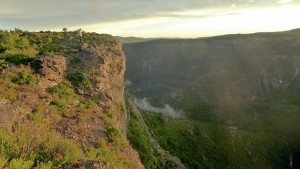 on the ocean floor 200 million years ago.

The many fossils that can be seen today bear witness to this. After the final retreat of the seas 70 million years ago, they dried out and became limestone. This mass was put under pressure and beginning from 15 million years ago, the plateaus began rising and the topology of the present-day landscape gradually appeared.

Water and erosion cutting deep into the earth.

Water flowing on the surface changes the landscape, wears it down and reshapes it. Through the many fissures and cracks in the plateau it rushes underground, making wells and subterranean galleries before re-emerging much lower in the valley and feeding the Vis river. The waters of this river rise on the schist and granite slopes of Saint-Guiral before plunging down into the earth in Alzon, as soon as they comes into contact with limestone, to then reappear at the Foux Mills.

Although they appear unspoilt, these gorges and plateaus were frequented and shaped by people. Many ruins bear witness to its rich past, which often has faded into the landscape itself. In Saint-Martin-de-Castries, an archaeological study identified the remains of the ancient priory, the Roc castle, where castle ruins and rocks merge and the cities of the Templars at La Couvertoirade.

Megaliths : from myth to reality !

Standing stones and lying stones punctuate the territory. Vestiges of the first farmers, the dolmens were collective graves and are now megalithic witnesses to complex  funerary practices. The menhirs have remained enigmatic: they mark territories and recall the bravest, through values that are unknown to us. The circles of standing stones, ancient henges, surely tell the story of those who lived and came together there.

In this landscape, the subterranean world contains many natural riches. Throughout history, the caves have provided the very water of life to the inhabitants of the Causses, as well as clay and calcite for pottery and shelter and refuge for themselves and their animals. From the Middle Ages to the early 20th century, the mineral wealth mined in the caves also provided a more ephemeral wealth.